The winner of a competition to design a new Greenway and park to form the centerpiece of St Cuthbert’s Garden Village communities in the south of Carlisle, Cumbria has been announced. 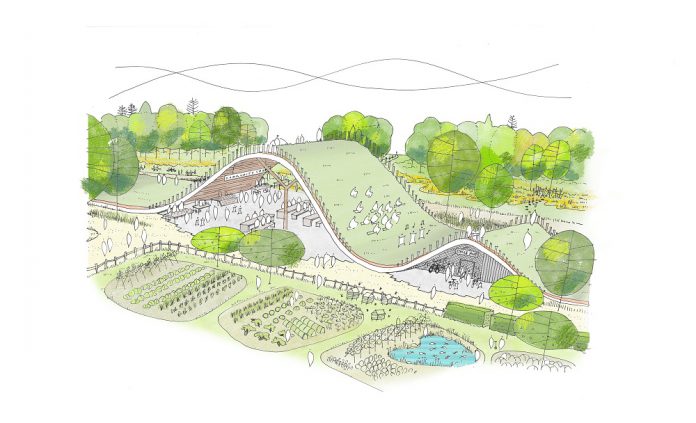 Gillespies, The Greenway Ribbon is the winner of the Start with the Park: St Cuthbert’s Garden Village Competition.

A public exhibition showcasing three shortlisted designs was held last year.  These early design ideas were then developed further and the eventual winner was chosen by a judging panel made up of Carlisle City Council, the Landscape Institute, United Utilities and a broad range of community representatives.

“A really comprehensive, professional and well considered proposal demonstrating a clear understanding of the context and brief.”

“Showed a good understanding of the area and site.”

“The Greenway Ribbon is an innovative and professional approach to a landscape based placemaking project. The theme of ‘Start with a Park’ is very apparent throughout the design and does an excellent job of re-wilding an area of good agricultural land.”

Carlisle City Council, in partnership with the Landscape Institute, launched the two-stage design competition in 2021 and received 13 professional entries. Three finalists were selected:

‘Start with the Park’ – to be based near Durdar and Blackwell – is an opportunity to create a resource that could be a visitor destination attraction in its own right and will benefit the existing and future residents of Carlisle. By establishing the ‘Greenway’ at the outset of SCGV, a greenspace will be created at the heart of the community and will be a unique selling point. It will also connect the proposed new communities with each other, with existing villages in the area, with the city, and with the surrounding countryside.

The Greenway also provides an opportunity to look at new ways of delivering cycling and walking infrastructure in Carlisle to encourage recreational and active travel. A key element of this will be ensuring that this connectivity is both within and beyond the garden village – in particular ensuring active/sustainable transport connectivity to the city centre and the transformational regeneration projects within the southern gateway area such as the railway station improvements, new university campus and business space at the Citadels and Caldew Riverside.

Carlisle City Council partnered with The Landscape Institute, and United Utilities as main sponsors, to deliver the competition, which launched on Monday 12 July 2021. The competition was open to both professionals and students across a range of disciplines.

The professional competition followed a two-stage process. Each of the three entrants selected to progress to stage 2 of the competition were awarded an honorarium of £5,000. The overall winner of stage 2 will receive £10,000. It is the intention to award a contract for the delivery of the winning scheme. However, whilst landowner negotiations are well underway with positive conversations taking place, should these not be concluded at the time of the competition outcome, there will be a delay to the award of contract.

The Greenway, ‘Start with a Park’ project is identified in the Carlisle Town Deal Investment Plan, alongside six other schemes. Carlisle submitted the Investment Plan to government in October 2020 and received a Heads of Terms offer for £19.7 million of investment for the city in March 2021.