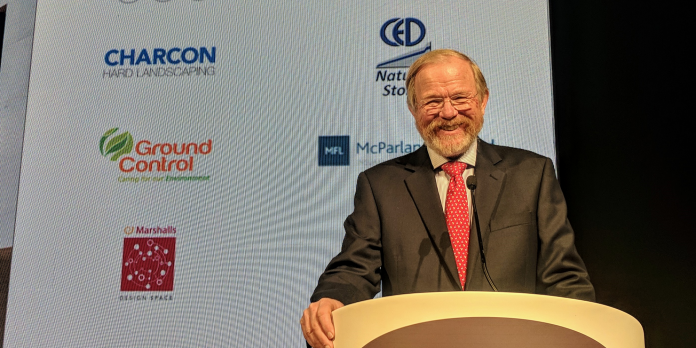 LI President Merrick Denton-Thompson made the announcement on 23 November 2017, at this year’s Landscape Institute Awards ceremony, which Bill presented.

‘We actually have one final award to present tonight,’ Merrick said, following the presentation of the President’s Award – which traditionally brings the ceremony to a close.

‘Aside from being one of the great chroniclers of British life and culture, Bill Bryson has, for many years, been a true champion of landscape.

Bill’s passion for sustainability in both rural and urban environments is truly infectious. His writing effortlessly reminds us of the effects of our environment and how they contribute to our sense of place and wellbeing.

‘Through his campaigning, including the vital work he has undertaken with the Campaign to Protect Rural England, Bill has drawn public and political attention to the importance of sustainability in both rural and urban environments. Bill’s passion for these projects is truly infectious and has helped inspire and educate others about these deeply important issues.

‘But we also honour Bill for the way his words capture the effect of our landscape and built environment on us. Whether it’s indignation at the badly planned, or wondrous awe at the beautifully made – or perfectly conserved – his writing effortlessly reminds us of the effects of our environment and how they contribute to our sense of place and wellbeing.’

Bill’s books have sold more than 15 million copies worldwide and been translated into more than 30 languages. His science book, A Short History of Nearly Everything, won the Royal Society’s 2004 Aventis Prize and the European Union’s highest literary award, the Descartes Prize.