Simon Odell visits the Poison Garden at Alnwick and considers what our response might be to toxic species. 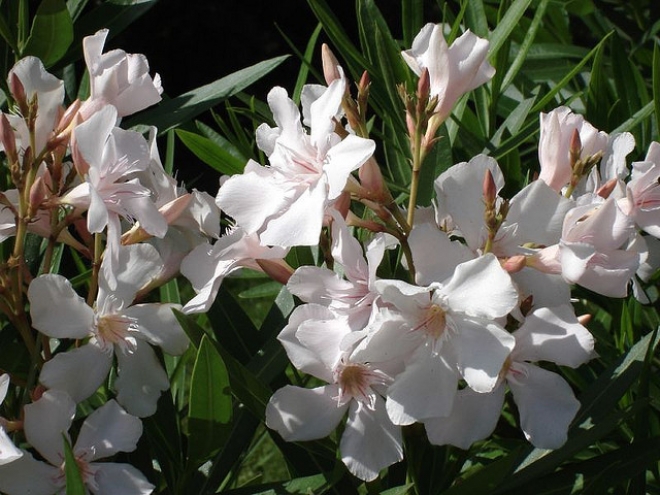 I recently visited the Poison Garden at Alnwick, where there are over 100 different species. The whole garden is locked and a good place to be reminded of plants which are toxic. It was also interesting to see controlled drugs grown in locked cages and it was actually a relief to be outside it again. But when I some days later met someone from BALI who recalled seeing Oleander used on one site in London I thought it was good time to remind myself and, through this blog, others of the toxicity of some plants. It is a key knowledge area for landscape managers, designers and reviewers of planting schemes. Indeed this could be an area where local authority landscape professionals may be able to bolster the case for retention of their skills.

Oleander is normally associated with Mediterranean environments so I can only assume someone thought with climate change it might do well in London. But every part of the plant contains chemicals that can affect the heart and potentially be fatal. Other toxic species, which should be avoided in new schemes without good reason include yew (Taxus baccata), laburnum (Laburnum anagyroides), and mezereon (Daphne mezereum).

Toxic species which may be encountered by landscape managers but are unlikely to be specified except by thoughtless but well-intentioned use of native species lists include: Deadly nightshade (Atropa bella-dona); Hemlock (Conium maculatum), Lords-and-ladies (Arum maculatum), Cowbane (Cicuta Virosa), Monkshood (Aconitum napellus), Henbane (Hyocyamus niger) and Hemlock water dropwort (Oenanthe crocata) a species where poisoning is very likely to be fatal. But these are only a few of the many species to be avoided for humans and the list can be extended when considering toxicity to animals. For a longer list, the RHS pages may be helpful as a start.

How serious is this as an issue? Many poisonous species such as hemlock are widespread in the UK as the NBN website can evidence and I was surprised as I pulled up the maps with the species I have listed above.  While accidental poisoning cases may be rare, in 2014 a gardener in Hampshire appears to have died after handling Monkshood (Aconitum napellus). As professionals we may be expected to have a higher duty of care in this area.

So what might our response be?  What control measures? Remaining familiar with the names of toxic species which might sometimes be suggested would seem a sensible starting point. Ensuring anyone managing any landscape wears gloves I would expect would be typical; these are not just to avoid cuts and dirt. And I would trust that landscape and countryside managers and ecologists would be able to identify the most common poisonous species. But I am not an expert and not at this stage setting out guidance, so I would particularly welcome responses to this blog.

Other material used in preparing this article

This image Oleander is by Ava Babili on Flickr, published under the Creative Commons licence.

4 August 2021
0
Submitted by NatureScot Scotland's coasts are an important part of its nature and landscapes. There is great variety, ranging from the long sea...