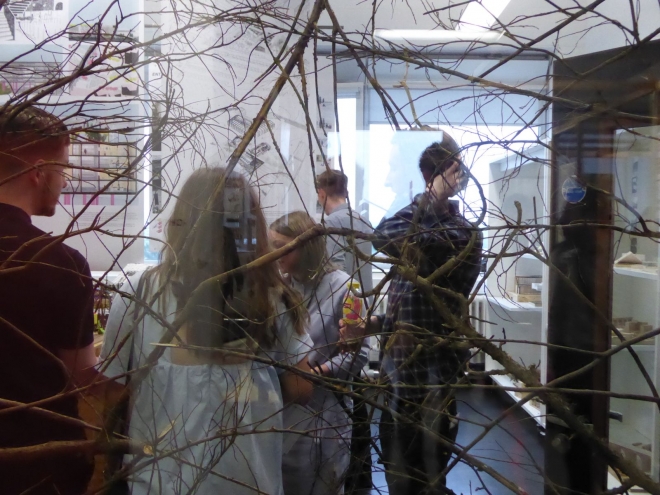 The MMU End of Year Show opened its doors on Thursday 9th June for a specific Practice preview, with the public Open Evening the following day.

For those who have paid attention over the past year or two it was a poignant event, being the exhibition of the work of the very last cohort of undergraduate Landscape Architects to attend Manchester Metropolitan University.

However, to correct some rumours known to be circulating, the subject is still alive and well at MMU in the form of a new two year Master of Landscape Architecture. So, the course that produced alumni such as James Corner of Field Operations, lead designer for the New York Highline, and Jason Prior of Aecom (Olympic Park masterplans in London and Rio de Janeiro), has not in fact closed its doors but has moved into a new phase.

This was in a single room at the top of the Benzie Building, and overcame the usual issue of how to cram twelve months hard work into a limited space by the hanging of double-sided A0 sheets from the ceiling, with a small model of the scheme at the foot.  Each sheet included half a dozen lines of text which explained the thrust of the brief each student had set for themselves, a very useful technique to assist the viewer get to grips with the conceptual approach: further evidence of endeavour could be found by reference to portfolios and design developments available on the School’s website.

The chosen site was Mersey Square in Stockport, a harsh urban space in the shadow of the town’s famous railway viaduct. A consistent approach was adopted by virtually all the schemes, with a focus on introducing intensive planting and softness such as of copse and meadow as a setting for the necessary circulation – some schemes decided to remove traffic altogether, others accommodated it in concealed tunnels or ha-has (if you can’t indulge at this time of your career when can you do it).  There was a general recognition of the need to provide respite from the urban world, relieving stress and re-introducing natural processes, one in particular tackling the ubiquitous problem of drugs by including necessary infrastructure for a controlled and managed activity.

This general desire to improve an urban space without overt control and pattern making fell in with the aspirations expressed in conversations with a few of the students. They have seen Landscape Architecture as a way of making a difference to the environment with a clear recognition of the personal satisfaction and ownership of their interventions (or ‘affordances’ as one summary would have it), with almost half of the Year having undergone a career change to take up their place on the course; none expressed any regret at doing so, despite the arduous financial demands, but this did consistently result in the comment that a couple of years in practice was now required to restore finances and gain experience before taking up the postgraduate course.

There are always prizes: this year due to a complete lapse in spatial awareness by the MSA hosts, the ceremony was held in a long narrow space in which it was impossible to see with announcements  totally inaudible.  However, good authority has confirmed the following awards were made:

So, that’s it for the undergraduate teaching of Landscape Architecture at MMU. To the last cohort – Courtenay, Elliott, Godwin, Hayley, Isabella, Julia, Marika, Sam, Toby, and Tom – congratulations; the last of the many! Take a bow, it certainly went out on a high. We all look forward to seeing your postgraduate exhibitions when you decide to return to your studies.

If you have read this far please note again that the Postgraduate and Conversion routes are still taught, leading to a Master of Landscape Architecture, to be accredited by The Landscape Institute.

28 July 2021
0
Submitted by: LUC LUC prepared an impact assessment for an expansion of marine energy generation in a sensitive location off the coast of...