Romy Rawlings CMLI, Chair of the LI’s Diversity and Inclusion Working Group, shares her thoughts on the lack of diversity in the profession highlighted by the recently published State of Landscape survey results

Earlier this month, the spring edition of Landscape was published. It will no doubt stimulate much-needed debate about future talent – and the pressing need to act on several of the findings from the State of Landscape practice survey.

The LI is very much focused on the need for more diversity in the profession. The recently initiated Diversity and Inclusion Working Group has identified five priority areas:

The survey highlighted two in particular: the gender pay gap at higher salary levels (over £50,000), and the lack of ethnic diversity in the profession.

These are interesting, and contrasting, aspects of diversity. They have very different root causes, and there’s a real need to understand the finer points of the issues we face if we’re to bring about lasting change.

Women in the built environment sector

For instance, there is no inequality in terms of gender balance at entry level. In fact, more women than men enter university to study landscape architecture. Unlike many other built environment professions – particularly engineering – we don’t have a problem attracting women to the profession. But as they rise through the ranks, the number of women dwindles and, as is the case at the peak of most careers, the gender mix is entirely unbalanced.

One might lay the blame for this with women who take time off from work to raise children. (Possibly also to care for ageing parents, as many of us enter the ‘sandwich generation’.) Some such issues will only be improved through central government initiatives. But landscape practices could do a lot more to nurture talent that is otherwise lost: flexible working and ‘return to work’ schemes being key.

But is there a more insidious problem here? A very uncomfortable theory many would prefer to deny?

There are so few female role models in leading positions within the LI. What do our younger members think when they see a stage or panel of only men?

We know we recruit like-minded individuals to surround ourselves with. So is this, very simply, the same issue that – for instance – the 30% Club is aiming to tackle for the FTSE-100? (Bear in mind that one reported reason behind this scheme is that gender-balanced boards lead to more effective governance and higher profits!)

Revealed: The worst explanations for not appointing women to FTSE company boards. (Via gov.uk.)

We need many more visible senior female members of the profession. When there are so few female role models in leading positions within the LI, who do our younger female members look to? And what do they think when they see a stage or panel of only men? (Unfortunately, still a very common occurrence.)

In terms of ethnic representation in landscape, the issue is very different: the intake is completely unbalanced from the start.

This is an entirely different challenge. We need to tackle it through a new set of initiatives – potentially also seeking to address social economic diversity. Are we facing a considerable sector of the population that isn’t aware of landscape careers? Is put off by long study periods and high tuition debt? Or, again, has few role models within the profession? These are question that charities such as the Stephen Lawrence Charitable Trust are already working hard to answer.

How to broaden intake from both groups?

For me, it seems that our new Landscape Apprenticeship Trailblazer has the potential to make a very real difference. The initiative and others like it could really help us attract to the profession a more diverse intake that better represents the UK population.

If we remain an organisation that’s run by predominantly white, middle-aged, middle-class, male professionals, how can we possibly face the challenges that prevail in the UK right now? If we’re to effectively tackle the global issues we face, we must broaden our membership. But we must also broaden our outlook if we’re to design and manage landscapes that truly reflect the communities within which they’re sited.

Want to make a difference and get involved in the recruitment of young people into the profession? Look out for the imminent launch of #ChooseLandscape. 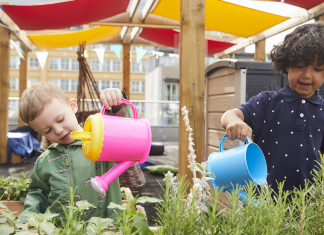 Coin Street: How a community in South London transformed its own...

15 April 2021
0
From a derelict site to a thriving neighbourhood on London's South Bank, Coin Street is a story of success in community enterprise, engagement, and ownership, and place-led transformation

Bespoke Playscapes – The Power of Design to Connect Communities to...

What is of public interest?